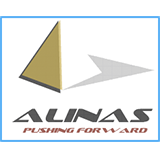 Alinas is the oldest and most respected corporation on Ptah. Primarily focused on agricultural tools and machinery the company now touches 70% of global food production and distribution resources at some point. Under the robust and energetic leadership of Anne Selket, Alinas has been aggressively redefining itself as a company aimed at the future and "pushing forward." The Agricultural Machinery segment continues the Alinas' tradition of producing farming machinery, including hydroponic systems, zero-G energetic growth manufactories, and "traditional" soil farming; this is now mostly for major industrial domains and Alinas corporate combines. The Industrial Farming segment oversees physical farming and plantation operations, producing the vast majority of the world's foodstuffs. The segment also includes Alinas' chemical division, producing herbicides, pesticides, synthetic fertilizer, and bio-diffusion fields. The Biotechnology segment engineers new and altered genetic strains of seed crop and livestock, as well as genomically synthesizing an increasing number of protective and generative organisms to increase food production: this segment's product line includes Flaxane, Vertishield, and Aegis Maodou Breeds. Joint ventures between the segments have been experimenting with orbital hydroponics stations; this effort has seen growth in recent quarters thanks to increased interest in the Rain phenomenon.

Anne Selket was groomed from a very early age to take over her role as the head of Alinas, just as all the previous PCKs of the corporation; she has proven to be all that the corporation hoped for and more. Selket excelled in her academic courses and proved a blazing star on the social scene-in fact, most people know her more for her roles in the Marcellete Eunomia series of films or her famous portrayal of Salmaht at the Ukelo Festival in 6254 than as a corporate head. Universally hailed as the most beautiful woman alive, Selket garners attention whether announcing Alinas' corporate programs, posing for fan photos, or just walking down the street. As the 148th High Priestess of the Alinas cultus, she also generates a good deal of interest (though Selket has always downplayed this aspect of her position). Her public persona is one of brilliant grace and witty charm.

Privately, Selket is known for her unbending will and razor-sharp mind. Those who walk into a meeting with her expecting only a well-spoken corporate figurehead often walk out looking rather stunned and now bound in a complex Alinas contract. She is also known in business circles for an iron will and little to no tolerance for failure. Selket is intent on pushing Alinas to the forefront of technology, not content to rest on one of the most well-respected corporate names on Ptah. She has poured a great deal of Alinas' capital into new business segments and has invested herself personally into dozens of new projects.

The corporate base of Alinas is the awe-inspiring Alinas Temple, rising from the misty lowlands where the Huphr empties through its endless deltas into Lanarak Sound. Built for Alinas some two centuries ago by the Purus Corporation, the Temple is the most recognizable structure on Ptah. Its garden atria, hand-carved reliefs, and majestic spire are still hailed as architectural masterpieces. (The company has taken pains to maintain the historic grandeur of the structure even as they have updated the technological infrastructure.) The land around the tower was marshy bog, requiring hundreds of tons of limestone to be sunk for the foundations, and many shook their head at "Alinas' Folly," but within a century the land was a garden paradise: a living testament to Alinas' prowess at environmental manipulation. Memphis, the site of the Temple, was a village that grew into a garden metropolis with the grand construction; both are tourist attractions in their own right. Indeed, within ten years of the completion of the Temple, Memphis was made the capital of Tkele, leaving the previous capital, Mahalay Sala, to fade into urban blight.

Alinas is the oldest corporation on Ptah. Its roots most likely go back to the first theistic aggregate farming communities along the Huphr River—it was there that the concept of confederate crop cultivation first arose, the principles of which still form the basis of what is widely known as the "Alinas method" of management (in which the individual retains a degree of autonomy but overall risk is minimized). Despite its sectarian roots, Alinas transitioned smoothly into the secular corporate world, bringing sacerdotal and corporeal concerns together. Indeed, Alinas is the only openly ecclesiastic major corporation operating in the business sphere today. Though they do not tout their ecclesiastic standing, the Alinas cult has always been part and parcel of their business method. While the other major corporations have disassociated themselves from religion, Alinas keeps an air of mysticism about its operations. Many speculate that this increases corporate loyalty and raises public interest in the company.
— — —
Alinas has taken a new direction under her current PCK, aggressively seeking to redefine itself as a company aimed at the future. Massive new R&D efforts in water filtration, desalinization, and even synthetic hydration substitutes are only a handful of the new technologies Alinas is pursuing in light of the astronomical events taking place. With these goals in mind, Selket believes the Rain to be a natural and self-evident opportunity in which Alinas should take a leading role. The PCK's power is balanced by a conservative board who have a reputation for solid and careful planning—Alinas has traditionally taken the long view, and the new push for rapid change has made some of the shareholders nervous. Overall, though, investors have been pleased with Alinas' new focus. Certainly, Selket's personal celebrity and pop icon status have not hurt the company's profit margins.

Alinas shares some important business ties with Clarifex—as suppliers of the most the cotton, wool, and now bio-synthetic fibers used in their industry, their business segments interact on several fronts. Clarifex has long lobbied Alinas to lower production costs on their end and often suggests that textile prices are as high as they are because their suppliers are overcharging for materials, which Alinas denies (suggesting Clarifex's skyrocketing prices have more to do with their promotional campaign costs and designer trademarks—and, privately, the lackluster leadership of Clarifex's previous PCK—than expenses of supply). The contentious relationship between Selket and Clarifex's PCK Michael Anu is well known.

DASA Corp. and Alinas are heated rivals in many areas of the pharmaceutical business. Chemical medications are clearly DASA's province, but in the field of biological cures (including the ever-expanding list of vaccines), DASA's market share is being threatened by Alinas' Biotechnology segment—the courts of the major nations of Ptah are teeming with patent cases being fought between the two corporations, and fierce competition between their R&D departments, some rumors say, has gone beyond research and into the realm of active sabotage. Alinas has also made a nice profit on offering alternative natural remedies and undercutting DASA's "Wholesome Wellness" line.

Alinas shares probably the strongest corporate ties with DDH Matsya industries. The two have worked hand-in-glove for many years and have publicly pledged loyalties in the past. The two corporations were instrumental in creating the food distribution network as it operates today and they hold several joint patents on perishable shipping equipment (several of which are up for renewal in the next decade). There have been rumblings from some Alinas board members that the near monopoly on transportation corridors which Matsya holds are hurting profits and ought to be revisited, but so far this has not seemed to affect their close relationship.

Many have lobbied Alinas to cooperate with IDX to create a new generation of agricultural equipment with improved power output. (One traditional complaint of Alinas machine owners is their lack of fuel efficiency and parts-hungry generators—the phrase "runs like an Alinas combine" is common slang for a poorly performing machine.) IDX has made several overtures to this end, but Alinas has always refused.

Like many corporations, Alinas has close business relations with Mystery Alliance. Rumors suggest that Alinas has recently applied for (and been granted) more sizeable loans than in the past; scuttlebutt has it that some arcane and worrying agreement has been reached between Anne Selket and MA's PCK, Parsu Carnake (which may have included some private understanding, given that Selket recently chose to take a two-week vacation in Mystery—not a traditional holiday destination by any means).

What can be more important in life than how you sustain life? The food you eat—the food you feed your children—the food you share with friends and family: it's more than just energy for your body. Food is a family issue, a relational issue, an environmental issue, a spiritual issue. At Alinas, we strive to provide farmers with the tools they need to grow bigger and better harvests to feed our hungry world. We help augment production through safe and effective technologies in multiple sectors and a variety of goods to meet every need. And we are at the forefront of developing environmentally friendly products and processes that will carry us into the future.

Alinas: Hand in Hand with Nature.